Menu
PrevPreviousCoronavirus & Musicians – What Now?
NextHow To Use Playlists As An ArtistNext

Simon Sinek’s TED talk “How Great Leaders Inspire Action” was an eye opening video for me. What he teaches is essentially how large innovative companies got where they did with all the same tools available to everybody. He dissects how these companies have built great success with the same methodology.

For a while now I’ve wanted to share his findings and translate these to how a musician or artist can use his methods. Artists such as Lady Gaga, Madonna and The Beatles have all followed this method to great success. By taking the usual tactics of marketing and working backwards, these artists are communicating the reasons WHY they’re in this game. Tapping in to the emotions of audiences with your values and beliefs is the secret to success.

Typically when we are marketing something we start with the WHAT (what you are doing, what you have made and what you are selling). Everybody knows their WHAT because it’s your product, right? Then from there we go into the HOW (how your product is made, how it will benefit the customer and how it will affect the customer). And finally, the WHY, which most people fail to communicate.

Simon Sinek’s findings saw that if you simply reverse the process from WHAT, HOW, WHY – leading from your WHY and working your way to the WHAT – this is how hugely successful companies and artists communicate to their audiences.

By reversing the process and starting with WHY you are creating music, WHY you’re driven, WHY you have your interests; you’re pulling at people’s emotions and creating a connection in the brain which drives loyalty. Give people a reason to become obsessed with you. This is how you build a fanbase… Through emotional connection.

Lady Gaga’s fan base dubbed The Little Monsters will happily wait in queues for hours to find the best spot at the concert to be close to their idol. Similar to how masses of people would show up to watch Martin Luther King speak. They were driven by emotion. They showed up because their beliefs powered by emotion, matched that of their idol. They weren’t simply asked to come, they felt drawn to be there, to act out their feelings in the company of a man who understood them. The same goes for The Little Monsters and Gaga too.

Every single musician knows WHAT they do (they make music obviously). They know HOW they do it (with instruments, software, hardware, etc.) but very few know WHY they do it.

WHY have you chosen this lifestyle? It’s certainly not the easiest – the odds are against you from day one. So why did you make this decision? Perhaps you didn’t make a choice but rather your music is a way of expressing yourself and communicating emotions. If so, what do you want listeners to feel with your music?

Being a musician is part of your identity as it is who you are. Unfortunately there’s a huge disconnect when it comes to actually speaking about the song or album musician’s have poured their everything into.

Marketing and promotion of music by independent artists falls very short. The usual words follow along the lines of “I made this song. I’m excited to share it with you. Buy it.” This is the WHAT. Of course it’s easy to share the HOW too, “I collaborated with John and Jane; we used Ableton and sampled an old track”. This is uninspiring, it doesn’t drive action and it’s been done millions of times.

Innovative artists start with their WHY. Then the HOW. Then the WHAT. Lets use Kendrick Lamar’s project DAMN as an example.

How a regular musician would pitch the album DAMN… “I created this album with 13 songs (WHAT) and it features Rihanna, U2 and Zakiri. I have also worked with producers like Mike Will (HOW). Listen to my album.”

Let’s pitch it in reverse using the Golden Circle… “Your biggest enemy is your own ego (WHY), so I created this album where I wanted to trigger specific emotions with each song. Through sharing my stories, I want to help you face your ego (HOW). Listen to my new album DAMN (WHAT).

You see what I did there? Which part do you think triggers an action?

Patron Saint of Misfits – Lady Gaga – stands for inclusion for all those who felt weird or outcast or misunderstood. She always preaches the message of inclusion in everything she does. Even the lipstick line she launched with MAC she says “I wanted to make a lipstick that is neutral that fits every color, race, and face.”

Great leaders like Gaga stand for something. Everything they do is consistent with their values. That’s also how you go on to win Oscars, Grammys, BAFTAs and Golden Globes within a single year. You go Gaga.

The Brain & The Golden Circle

So we know the goal is to establish a fan base who shares your beliefs and interests. This is all grounded in biology, not psychology… The brain is divided into the same components as the Golden Circle we spoke about above. 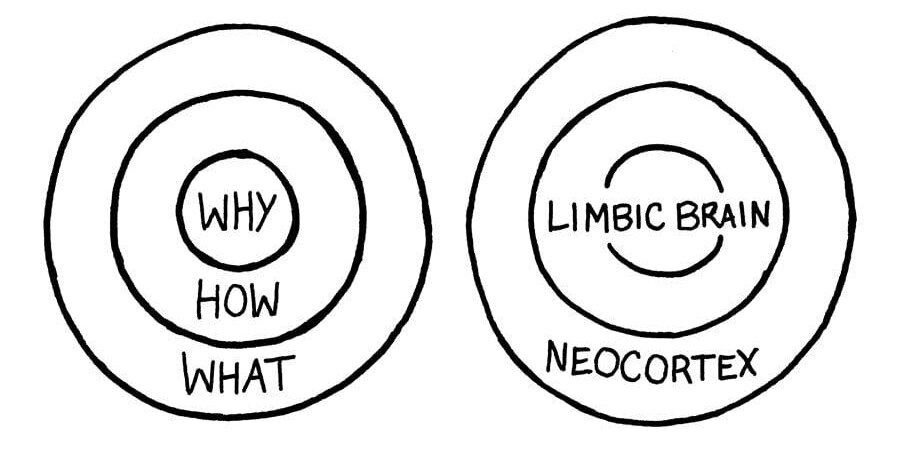 The outer part of the circle shows the Neocortex section which represents the area where the WHAT is processed. It’s responsible for rational, analytical, thoughts and language.

The two inner circles represent the Limbic section of the brain. This is where feelings, trust and loyalty are processed. It’s also responsible for all human behaviours, decision making and has zero capacity for language. It’s where ACTION is conjured up. It’s this reason why you need to work from the inner circles outwards when promoting your music. You want to create ACTION.

The goal is to always sell to and work with people who believe what you believe and not just buy WHAT you do.

If you make music to purely make money or become famous, this isn’t a recipe for long term success. If you’re aiming to become one of the greats you must represent something you believe in. Your passion and purpose is what will shift the sales.

If you talk about what you believe you will attract the fans who believe what you believe. WHY is this important. Well let’s go into the law of diffusion that Simon covers in his TED talk.

In order to gain market penetration and MASS market success you will always need to attract your first followers. These are the guys who will buy your music for emotional reasons. You have triggered something emotional in them through your music. This is your tribe. Your niche.

Lady Gaga’s important group of early adapters and innovators are the LGBTQ+ community.. This group reflected the exact same values as Lady Gaga preached and she somewhat became a spokesperson for the community.

At the start, she began finding these sub groups/niches that resonated with her and her music. These are the fans who will stand in line for hours to get the good spot at a gig. These are the people who would typically queue for the launch of a new Apple product. There’s no logical reasoning behind why they stand in line for hours, it’s an emotional connection/cult like response to their feelings.

It’s this reason why it’s so important to start building your community straight away. Your first followers are by far the most important. Learn from them, try to find more people like them and analyse what their interests extend to.

Focusing on sheer volumes of fans will result in one-time purchases and won’t nurture the relationships with those fans who would stand in lines, sign up for exclusives, stand by your side through the journey of your career. Stop focusing on catering to everybody and focus your energy on the early adopters.

There are leaders and those who lead. Those who lead inspire us. We follow them because we WANT to not because it’s a necessity. And those who start with their WHY have the ability to inspire those around them and find others who inspire them.

What do you think? Leave your comments below

Launch your next single with me
Get Started

Do you want your music to reach more fans?

Hey, I'm Rebecca Smart Bakken. I'm determined to help musicians grow their audience. Will it be yours?
Learn More

Some of you may have also seen me on HGTV´s show “Beach Around the World”.

Over the years, I’ve made a name for myself in the tech/ startup industry by helping 250+ startups scale with growth hacking strategies.

Now I want to help musicians and artists to promote their music and engage better with fans on social media.

A complete masterclass designed to give musicians all the tools needed to help you find and grow your audience.
Yes, I want to join

How To Go Viral On TikTok As A Musician, and How We Got The Attention of Universal Music & WorldStarHipHop With A TikTok Trend

How To Partner With Influencers to Share Your Music!

How To Use Your Instagram Story To Gain Fans!

How To Get Started Creating Musical Content On TikTok!

How to Use Messenger Apps to Market Your Music

Email Marketing: The most overlooked strategy for musicians

How to go viral on TikTok without creating ANY content yourself!